From San José we look to the south toward the 2500 m high mountain range of the “Cerros de Escazú”. The higher locations stand under nature conservancy because the forest is ecologically valuable, protects against landslides and floods and represents an important water reservoir. On the south side of the mountains – opposite San José and Escazú – lies the region of Palmichal. Here the expansion of the coffee plantations right up to the steep rock slopes represents a threat.

Thanks to connections through the coffee trade it was possible to gain support through the Neumann Company and to purchase the wooded headwaters of two brooks. The forest is protected in this manner and the water supply of the villages secured, even if the water resource has been diminished by the climate change. In addition volunteers from Germany came, who were obtained through EIRENE.

Embedded in the valley of the Río Tabarcia, we found a large chalet with guest rooms, beside it a restaurant, a maintained garden, an auditorium for groups and a trout pond. 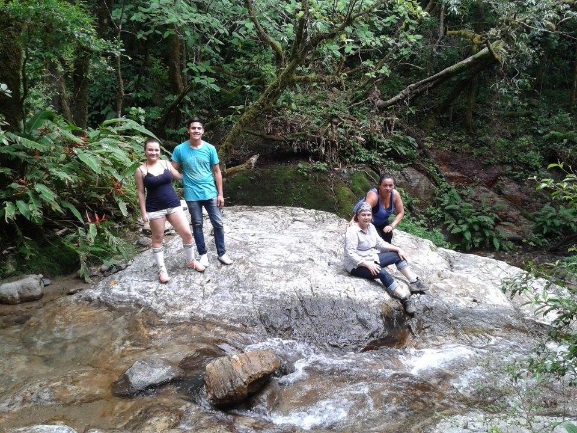 A hiking path follows the rippling brook to wonderful places in the forest. In April 2017 we spoke with Hernán Ramírez, the leader of “Nacientes Palmichal”. Hernán had taken up this project once as the topic for his final disseratation at the university, and today he is still active.

We were impressed by this combination of theory and practice on the one hand, and of perseverance on the other.

In addition we noted the good cross-linking of the organization with like-minded people, public institutions and the eco-tourist network ACTUAR.

Finally, the lodge offers opportunities for an alternative income in an area strongly dependent on coffee.